After a nervous nights sleep in a local hotel I had an 0715 start – rider number G24. The weather forecast was looking pretty rough with low pressure dominant in the north. Constant showers with wind from a south westerly direction meant a following breeze to Edinburgh but then tough headwinds predicted for the return to London. In the event we had rain every day. I wore my overshoes throughout the four days of riding and never got wet feet. Lucky boy!

Start time arrived and the G men and women headed off towards the M25 and out into the countryside towards St Ives control. I got into a group of about 8 and we hammered along – far too fast – everyone looking a bit serious and not much being said. My rough plan was to divide the ride into four parts and make it to Pocklington Control (211 miles) for Part 1 where I had a bag drop with fresh kit and supplies if needed. I think I was the only bike with aero bars in the group and found myself on the front too often.

First stop at 60miles was St Ives where a mega breakfast was devoured and then on towards Spalding and Lough Controls, crossing the Humber Bridge finally arriving at Pocklington at dusk. Part 1 completed in 12.04 hrs and av speed of 17.5mph, average heart rate of 119bpm. Burning over 7000 calories each day meant some serious eating was required. The quality and variety of food offered was exceptional throughout the four days. I used very few energy gels and bars. At Pocklington the faffing ritual began. Bag off the bike, collect drop bag, grab food and drink, fill water bottles, book a bed and wake up call, wash and settle down for a few hours restless sleep with constant noise from snoring, riders getting up or arriving to sleep and other human noises! My faffing was quite a time wasting problem until I became a little more experienced as the ride progressed.

I set off for Thirsk feeling pretty refreshed at 0200hrs. The SONdelux dynamo on a Hunt wheelset with Exposure Revo light were working well and made for safe night riding. By now I was riding quite a bit of the time with Antonia from Devon – we had similar speed but she was stronger on the climbs whilst I caught up on the descents. Pit stops at Thirsk (0519hrs), Barnard Castle (0923hrs) kept me going well and we arrived at Brampton (1346hrs) ready for lunch having climbed the famous 600m Yad Moss in perfect conditions. I missed Lockerbie out opting for the more scenic route over the mountains which was a bit special and worth the extra climbing. Antonia decided to push on at Brampton while I decided to have a couple of hours sleep which was my second bag drop so took a refreshing shower and changed my damp kit for a fresh set. I am able to recover well with a short nap and headed out towards the Scottish border with renewed energy.

Arriving at Moffat at 1940 hrs I had food and a break before heading out for Edinburgh climbing the side of the Devil’s Beef Tub as the sun went down. A great night ride to Edinburgh followed arriving at 2330hrs ready for more food and a few hours sleep. Part 2 was completed with 7 hours in hand but headwinds beckoned for the return to London. I averaged 15.2mph, av heart rate 100 for the 219 miles with 14.25hrs riding.

Next was a couple of short legs to Controls at Innerleithen (0658hrs) and Eskdalemuir (0955hrs). Spectacular scenery and some good climbs was the order of the day in the beautiful early morning light but some sharp rain showers were thrown in along the way. Near Carlisle I was amazed to meet many riders on the road still headed north – they mostly waved and smiled but must have been well behind the clock. Brampton was next for a good lunch stop at 1255hrs. We were back in England and although getting pretty tired and slowing up a bit were safely ahead of the 100 hour schedule. I took a short 45 minute sleep here which put me right and I escaped from that deep eye tiredness. 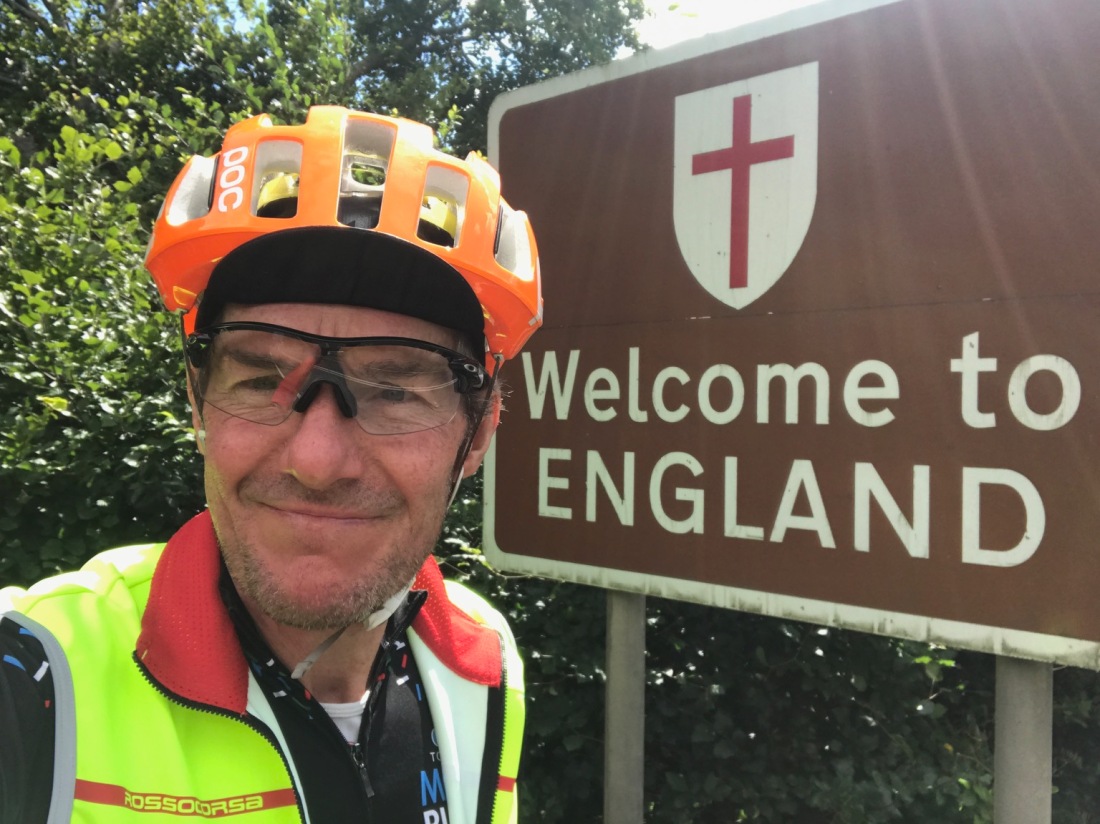 Arriving at Thirsk I was now in need of a decent sleep. I booked a wake up call in four hours and settled down only to wake after three hours and check the time in hand with a tired brain which looked quite tight. So in a bit of panic I got up right away and headed out for Pocklington.

Along the way I fell in with Robin and Elfyn and we shared the work as the headwind developed in strength. Elfyn opted for a slower pace and I went on to share many miles with Robin – a Falmouth Wheeler – who was a strong rider and gave me a good lift.

There is something very special riding into the dawns early light – even when raining – probably because one rarely chooses to be out at that time. We arrived at 0608hrs and fell onto the breakfast offerings with some determination. My Di2 battery for the electronic gears was showing red at Pocklington so I grabbed the charger from my bag drop and fitted the spare. Not good news to lose the gears.

Pocklington was an important psychological waypoint in the adventure. It had been the first stop travelling north so the whole distance started to feel doable. Everyone was suffering from aches and pains – in my case especially my backside – and in the end it simply came down to mind over matter! Another landmark was the Humber Bridge and this was crossed on the way to Louth Control arriving at 1124hrs for another break and food. Once over the Lincolnshire Wolds we descended to the flat Fenlands and were battered by a brutal headwind and occasional shower. Still working with Robin, who was planning a beer with friends in London that evening, we picked up a few more riders and started a good train towards Spalding. The landscape was relentlessly flat and barren with dead straight roads and I was thankful for the aero bars riding into the 20mph wind.

Refuelled at Spalding we headed out to cover the flat 40 miles to St Ives which only climbed 210m. By now we had been joined by a big rider from Ireland who was in a hurry – he was booked on a 0730 flight from Stanstead the following morning! Riding in the express group I was beginning to burn too many matches and after a few miles let them go. Always a sad moment when the train heads off into the distance and you are left to battle the head wind on your own. There were some dark moments during the next few miles but I eventually teamed up with Paul who is a main man with Audax Ireland. We arrived at St Ives at 2008hrs and after some food decided to get our heads down for a short sleep before the final push for home.

The night ride to Great Easton with Paul was nice and easy. We both had plenty of time in hand and rode along putting the world to rights. It was just like a slow Sunday club run and before we knew it we had covered the 45 miles to the Control. Food and a quick nap followed before setting off for the last time towards London. Another easy ride covered the distance without thinking and we came across a German rider who was pushing his bike 3 miles from the finish having used up all his inner tubes. We stopped to sort him out and the three of us rode to the final control at Loughton arriving at 0720hrs on the Thursday morning. I confess to a small tear as I crossed the finish line. I was lucky to ride with Paul for the last two legs. He had so much Audax experience including several Paris Brest Paris runs. A top man and great company. Thank you Paul. So Part 4 was complete. 264 miles, 18.58hrs riding, av speed 13.9 and av heart rate 100.

Brevet card handed in (it is sent to France to be certified), nice medal presented and then a big breakfast followed by short run to the hotel and and big sleep.

The organisation of LEL 2017 was exceptional. The Audax UK team at the helm were always on the ball, great communicators and brilliant organisers. Supporting them were the hundreds of local volunteers who greeted us with a smile and friendship. They were working long shifts and probably as tired as the riders. Chapeau to all of them.

LEL was the hardest challenge and would not have been achieved without the supporting cast including some great riding companions along the way.

Hello. I started cycling in late 2012, aged 63, with the intention of gaining a little fitness and losing weight. I slowly extended the rides with Lands End to John O'Groats in 2013 the first long one. Each year produced new challenges with local Sportives and trips to France for a couple of Etape du Tours and Tour du Mont Blanc. Every winter we headed to Morocco for a couple of months in the Campervan. A beautiful warm winter training ground for biking. My first real ultra distance ride, apart from LEJOG, was the 2017 London Edinburgh London. I warmed up for that with my third Ride Trafalgar Way and went for the Colossus ride of 500km from Falmouth to London within 24hrs. I have raced in five Bikingman Races over recent years, Corsica, Taiwan, Oman, Inca Divide and Portugal. Completed the TransAtlantic Way in Ireland twice and Bikepacking adventures in the Taunus Hills of Germany, in Morocco, France and New Zealand. I live on the Isle of Wight and ride with the West Wight Wheelers - a great group of mates. Rob Packham View all posts by Rob Packham